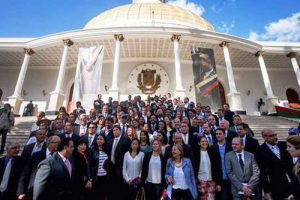 Below we reproduce the content of the dissenting vote of the Democratic Unity fraction, in the process of appointing 31 judges (13 official and 21 alternates) by the National Assembly on December 23, 2015

We, the Deputies of the Democratic Unity, express in writing our dissenting vote on the appointment of Justices of the Supreme Court, according to Article 96 of the Rules of Procedure and Debate, and justify it on the following grounds:

The current procedure for appointment of Justices of the Supreme Court has been deeply flawed from the start. It began without certain knowledge of the existing vacancies and it was postponed on numerous occasions until the last extension, in which the deadline for applications remained open indefinitely, in violation of the provisions of Article 70 of the Organic Law of the Supreme Court.

The argument for this indefinite extension, according to the Chairman of the Committee on Judicial Nominations, is the that the number of vacancies in the Supreme Court could increase, which confirms the illegality of the Committee, since according to the aforementioned law, the certainty on vacancies must be verified before activating the nomination procedure, without implying any risk of a power vacuum, because according to the law and the regular practice of the the National Assembly for the appointments in 2014, in case of vacancy, the alternates would take office, while the procedure for appointing new official Justices is initiated.

The haste with which the ruling party majority intends to appoint the judges is based not on institutional reasons but on a political agenda to prevent the newly elected National Assembly to participate in the selection of judges in December 2016, as it should have happened. In addition, there have been pressures to advance the removal of those judges whose term expires next year.

There are also irregularities concerning the nomination of the Chairperson of the Committee as a judge, which reduces transparency of the process as a whole, as well as the fact that the Secretary of the Committee has a substantial connection of consanguinity with the nominee.

Furthermore, there was noncompliance with the periods set out in the Organic Law of the Supreme Court to process the appointment procedure, which are based on the need to safeguard fundamental constitutional principles. Such periods enable the participation of citizens in the process of selecting candidates for Justices of the Supreme Court. It should be noted that the Constitution is clear in requiring that the first screening of candidates for judges of the Supreme Court is made «upon recommendation of the community» and further provides that citizens can file objections to the Committee or the National Assembly (Art. 264 of the Constitution), which is further explained in the Organic Law of the Supreme Court. These terms provided submitting objections to the nominations and for consideration by the Committee, seek to ensure the right to citizen participation. On the other hand, it also aims at ensuring a serious and rigorous examination of the nominations received, to meet the criteria of merits consistent with the high office that they will hold. In this regard, we should mention the flagrant disregard of the period of fifteen consecutive days set in Article 71 of the Organic Law of the Supreme Court for submission of objections by citizens against the nominees, as well as subsequent periods of eight and three days to allow the Committee to consider the objections and, if admitted, to hear the defence of the nominees about the objections, respectively. These terms are being openly contravened; the session to make the appointment of the Justices of the Supreme Court was was convened for today, December 22 (2015), with a legally established qualified majority, even though the fifteen-day period provided for in Article 71 of this Law for the objection has not yet expired, which must expire and remain open until completion. Just as serious is that the session called for today is held before the Judicial Nominations Committee has made a serious examination of the objections received, some of which may not even be considered and analysed in detail by that instance, if they are submitted to the Committee on the last day of the period.

It also represents a serious constitutional and legal violation that the Committee proceeds with the initial screening of nominees without seriously evaluating the candidates according to the criteria approved under the provisions of Article 73 of the Organic Law of the Supreme Court of Justice. Having the Committee make this evaluation within the period of fifteen days provided for the presentation of objections and before it expires completely involves neglecting citizen participation, which the Constitution wants to ensure, as well as a rigorous selection.

This also infringes Article 264 of the Constitution because of the serious irregularity incurred by the Citizen Branch, by making a second screening when the first list or initial screening of nominees for judges was not finalised by the Judicial Nominations Committee, in accordance with the Constitution and the law. The Citizen Branch has endorsed the legal violations denounced.
The basis of the functioning of a democratic state is the autonomy and separation of public branches as enshrined in the Constitution of the Bolivarian Republic of Venezuela, and the appointment of the Justices of the Supreme Court should be carried out within the framework and conditions laid therein without interference of partisan agendas or elements other than those purely constitutional.

We believe that the origin of all these irregularities comes from the subordination of the various branches of government to the Executive, especially the judiciary, causing perverse deviations in the administration of justice, lack of control and limits to the exercise of that power over the collective interest, as required by constitutional rule and necessary to avoid the excesses and mistakes that led us to a economic, social, legal, political and moral debacle we have today, with no response from the institutions because they are subverted by the Executive Branch, without responding to the interests and needs of a downtrodden population.

Similarly, the rushed actions of the current Board and the rest of the ruling party deputies in the National Assembly in the appointment of judges, demonstrates their desire to ensure the government’s control of the judiciary, by selecting at their discretion the highest judges of the nation and to undermine, unethically and morally, the decisions of the new Parliament, an unequivocal majority expression of Venezuelan sovereignty. We simply cannot legitimate these actions.

For these reasons, we categorically reject the violation of the Constitution that has been committed, which completely corrupts the procedure for appointing Justices.