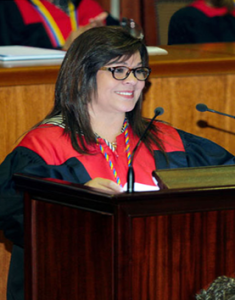 Justice Deyanira Nieves Bastidas is a lawyer and current second vice president of the Supreme Court.

In 2004 she was appointed and sworn in as judge of Criminal Appeals of the Supreme Court for a 12-year tenure, a position she holds today. Nieves was Control Judge of Court No. 11 and judge in Courts No. 4 and No. 7 of the Court of Appeals, positions she held in the Criminal Judicial Circuit of the Metropolitan Area of ​​Caracas.

She was also professor of Criminal Procedural Law at the Santa Maria University, where she graduated as a lawyer and as a specialist in Criminal Sciences.