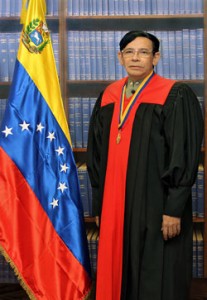 Justice of the Social Cassation Chamber. He earned his law degree from Santa Maria University in Caracas in 1986. At Preston University (USA), he earned a Ph.D. in Comparative Constitutional Law, a Ph.D. in Philosophy and International Relations and a Master’s Degree in International Relations. In 1999, the Judicial Emergency Commission suspended him from his post as judge. “It remains a mystery why I was included in that list, without the right to defence and due process, or evaluation of evidence, that is, in legal limbo,” he said on his suspension in an interview with the newspaper El Impulso in Barquisimeto on January 9, 2015. When asked about what it meant to the admitted to the TSJ, Mojica said: “I have been preparing for 50 years for this great achievement.”