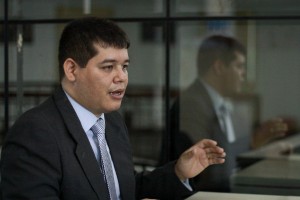 Justice of the Electoral Chamber of the Supreme Court appointed on December 23, 2015, by the National Assembly. He is 41 years old. Deputy to the National Assembly in the period 2010-2015 for the United Socialist Party of Venezuela in the state Trujillo. He graduated from Universidad de los Andes (ULA), as a political scientist and lawyer. He was in the Permanent Committee on Foreign Policy of the National Assembly. Between 2009 and 2010 he served as general director of Special Projects and responsible for coordinating the various institutional modernisation projects at the Ministry of People Power for Interior, Justice and Peace. Between 2008 and 2009, he served on the Monitoring Department at Petróleos de Venezuela.

He was Vice Minister of Presidential Affairs at the Office of the Presidency of the Republic (2007-2008) and deputy national director of Civil Identification in the former National Identification Office (Onidex) in 2006. From 2002 to 2005 he held various positions in the Government of the state Merida, in the Florencio Porras administration. His political-partisan experience dates back to 1994, when he founded the student movement Utopia 78 at ULA. He held various management positions in the former Fifth Republic Movement (MVR) in Mérida. He was also responsible for Electoral Politics (list of witnesses) of the Miranda Command (for the second re-election of the late President Hugo Chávez in 2006) in Trujillo, and head of Electoral Politics (list of witnesses) of Hugo Cabezas’s campaign for the elections for state governor of Trujillo in 2008.