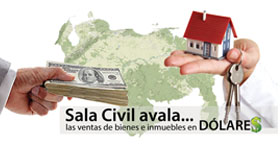 Although the article 318 of the Constitution states that «the monetary unit of the Bolivarian Republic of Venezuela is the Bolivar» and that in the country operates an exchange control since 2003, the Supreme Tribunal of Justice (TSJ) has opened the doors to carry out operations of purchase and sale in dollars of real estate in the country in dollars and other foreign currencies.

In its judgment 180, dated 13 April 2015, the Civil Cassation Chamber ruled that «no illegal act is committed when it has been contracted in foreign currency, especially when it has been agreed as reference, only that the parties must adapt their agreements, within the framework of the provisions of the current exchange regulations.»

The ruling, drafted by the president of the Chamber, Justice Guillermo Blanco Vásquez, was a response to a recourse that Edith Maria López filed against a judgment that the Second Tribunal of First Instance in Civil, Mercantile and Traffic issued in the trial that began against Sete Silva Albo, for the alleged breach of a purchase and sale agreement for an apartment in eastern Caracas.

In 2006 López agreed to acquire the house Silva was selling in the Caracas house development Dos Caminos for almost 420 million bolivars of the time (420 thousand bolivars), which translated into 195 thousand dollars. However, later there were some delays in the delivery of the documents that caused the first to sue the second in the tribunals.

«Obligations in Venezuela expressed in foreign currency and payable in the territory, are presumed unless there is a special agreement validly established by the parties, such as obligations that use foreign currency as the account currency, that is to say, the reference value of goods and services at a certain point, according to what is established in the article 115, today 128 of the Law of the Central Bank of Venezuela; (in force for the date of the contracting) it refers that the debtor of obligations stipulated in foreign currency will be released by delivering to the creditor the equivalent in bolivars of the foreign currency by applying the rate of the place to the date of payment», Blanco stated in his judgment.

The ruling of the Civil Chamber replicated the criterion maintained by the Constitutional Chamber, in its judgment 1641 of 2011, in which it stated: «From the Law against Exchange Offenses published in Official Gazette No. 38,272 of 14 October 2005, does not emerge a general prohibition on making offers or contracts in foreign currency provided that they are not contrary to law, specifically to agreements signed by the Republic, exchange regulations or applicable laws; What does become a guiding principle in this type of contracting is that if the payment is made in Venezuelan territory in order to have effects of release it must be made in bolivars that is the legal tender and its amount according to the official exchange rate prevailing at the time of payment.»

The then-Justice Luis Ortiz Hernández saved his vote because he considered that the majority of the Civil Chamber erred in affirming that the amount in bolivars had to be calculated at the exchange rate in force for the moment of the payment and not the one in force at the moment in which the negotiation was made.

The purpose of trading in foreign currency is that it serves as account currency, as these are mechanisms to adjust the value of the obligation for the payment opportunity, so it should establish the amount for the monetary variation of the dollar-bolivar conversion at the time the payment is made. (…) the article 1,264 of the Civil Code, which establishes that the obligations must be fulfilled as they were contracted, because in ordering to pay bolivars at the rate that existed for the date on which the definitive sale was contractually scheduled, ordered compliance with an obligation in a way different from how it was contracted (…)».