T.S.J. declares the validity of the economic emergency

In the T.S.J. opacity has no solution

The right to information in pitiable conditions in the T.S.J. 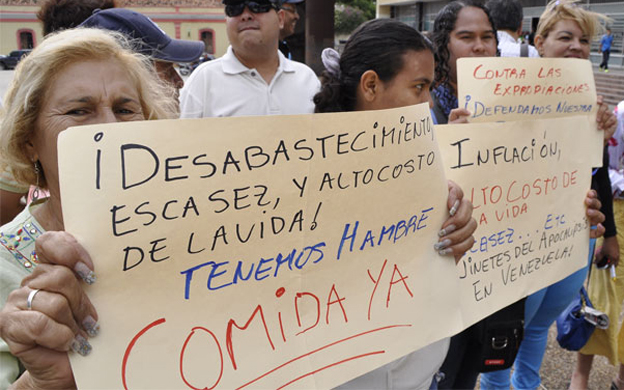 More than giving judgment, the Constitutional Chamber of the Supreme Tribunal of Justice threw a rope to the National Assembly. “They seek to tie the Parliament’s hands and feet”, said the Deputy Juan Miguel Matheus (PJ-Carabobo) before the judgment issued this Thursday 11 February by the highest court in the country, that endorses the validity of the economic emergency decree signed by president Nicolás Maduro on Friday 15 January.

In response to an interpretation recourse presented by communes and communal councils spokespersons on Wednesday 3 February, the Constitutional Chamber, in a joint presentation, not only endorsed the special measure taken by Maduro and rejected by the Parliament on Friday 22 January, but ruled the following: “The political control of the National Assembly on the decrees declaring a state of emergency does not affect the legitimacy, validity, effect and legal effectiveness of the same ones (…)”.

The Constitutional Chamber strengthens its position in this matter by stating that the “fundamental text provides expressly that the National Assembly may revoke the state of emergency decree, before the period specified, at the cessation of the causes that motivated it, action that could be subject to control of constitutionality by this Chamber (…)”. That is to say, the Justices limit the Parliament’s attribution to prevent the emergency be extended in time.

The T.S.J. decided to eliminate the applicability by unconstitutional of the article 33 of the Organic Law on States of Exception, that stipulates: “The Constitutional Chamber of the Supreme Tribunal of Justice will omit any pronouncement, if the National Assembly or the Delegate Commission disapprove the state of exception decree or deny its extension, declaring extinguished the instance”.

“With this decision the decree remains in effect, the National Assembly’s political control legal effect is denied and the Constitutional Chamber can know and declare the invalidity of the disapproval. In fact, even the control over the decree extension can be challenged and known by the Chamber. That is to tie the Parliament’s feet and hands”, insists Matheus, who also is part of the commission which analyzes the last renewal of the Judicial Branch carried out on December 2015.

The judgment suggests that the Parliament “did not timely comply” with the political control, because it would have had to rule on the emergency decree “within forty-eight hours after published”, under article 27 of the Organic Law on States of Exception. The presidential order came in Official Gazette on 15 January.

Nevertheless, the Constitution states in its article 339 that “the decree declaring the state of exception, in which the exercise of the right shall be regulated whose guarantee is restricted, will be presented, within the next eight days after it is issued, to the National Assembly, or to the Delegate Commission, for consideration and approval (…)”.

Relying on the Constitution, the opposition majority rejected Maduro’s initiative at eight days of receipt, time that the Constitutional Chamber also objects. “The maximum period for decision is eight days, but for the Assembly can subsequently decide after 48 hours (…) the special session completion must be satisfied”, the Justices argued.

This controversy that the T.S.J. began seemed to be solved from the 15 January itself. That day, after Maduro presented his report and accounts, the president of the Assembly, Henry Ramos Allup, spoke about this issue. “You have brought us today the economic emergency decree, there are two interpretations, one according to which there has to be a session in 48 hours and the issue has to be decided in 48 hours, others say that they are eight days”, stated in his response to the Venezuelan president.

In a national broadcast in radio and television, the head of state leaned towards the eight days option, reason why Ramos Allup stated: “Willingly. We count then, opposition colleagues, with eight days to discuss the decree in full (…) it has been put on record because the agreement is that we all think they are eight days, which is the best to discuss more, and of course with the prudence it deserves (…) ah, by all means!, and we count of course with the approval of president Maduro”. Sitting by the leader of the Assembly was the Justice Gladys Gutiérrez, president of the T.S.J. and the Constitutional Chamber.

“The eight days option was taken because Maduro himself said there were eight days to review the decree, but now it turns out that the Tribunal says otherwise. That is very serious”, said Matheus, who from a political perspective believes that the chavismo stokes the conflict of powers in order to “divert the attention from the people’s problems”.

Communal Council “San Antonio de Galipán”, “COMMUNAL COUNCIL PÉREZ BONALDE”, inhabitants of the urbanism “Ciudad Tiuna”, Commune “Bicentenaria Socialista” and others
8 days (03/02/2016- 11/02/2016)
Interpreted the article 339 of the Constitution and eliminated the applicability by unconstitutional of the article 33 of the Organic Law on States of Exception.
Joint presentation
Share This