The Supreme Court is always “in line” with the government. As if it were a website, the Administrative Chamber “blocked” the request for information of civil association Espacio Público to know whether the Ministry of Higher Education, Science and Technology was manipulating internet connection in the country.

The NGO asked on March 13, 2014 these three questions to the Ministry:

In the absence of a response, Espacio Público appeared before the Administrative Chamber of the Supreme Court on September 18, 2014, to demand the Court to urge the public entity to answer the questions. However, the presenting judge Evelyn Marrero Ortiz also closed this window.

Based on the views expressed by the Constitutional Court, Marrero Ortiz rejected the request arguing that the NGO had failed to specify “the use it would give to the required information,” and to determine “what are the actions taken by the Administration that – in their view – would lead to a possible infringement or irregularity affecting the individual or collective interests of citizens.”

To add insult to injury, the Supreme Court declared that the questions asked by the civil association “undermine the effectiveness and efficiency that should prevail in the exercise of public administration and governance in general”, and that “such generic questions” would hinder the work of the Ministry.

The questions asked by Espacio Público are in connection with the protests against the government of President Nicolás Maduro since February 12, 2014. As reported by computer experts and opposition leaders, the Administration blocked access to internet in the state of Táchira, the epicentre of the demonstrations, while ordering the “militarisation” of the state.

The U.S. Secretary of State, John Kerry, questioned on April 29, 2014 the fact that Caracas used “security forces to repress peaceful protests and limit freedom of expression and assembly.” Kerry stressed that “this has included blocking access to certain websites and restricting internet access in some parts of the country.” The Venezuelan Foreign Ministry rejected these accusations.

According to Article 337 of the Constitution, not even in case of a declaration of a state of emergency can the government restrict “the right to life, prohibition of solitary confinement and torture, the right to due process, the right to information and other intangible human rights.”

“(…) The petitioners merely stated that the information requested is necessary for the exercise of social control, without explaining the purpose of such control, or what were the actions taken by the Administration which in their view would lead to a possible violation or irregularity affecting the individual or collective interests of citizens. Also, the petitioners do not appear to have specified the use they would give to the required information; therefore, this requirement is considered unmet. (…) although everyone has the right to petition any public entity and receive a response in due time, in the case of such generic requests, the Administration would have to devote time and human resources in order to provide explanations about the wide range of activities it needs to undertaken for the benefit of society, and this would create an unnecessary workload on the justice system (…)”

Espacio Público vs. Ministry of the People’s Power for Higher Education, Science and Technology
3 months (from 18/09/14 to 03/12/14)
INADMISSIBLE.
Evelyn Marrero Ortíz 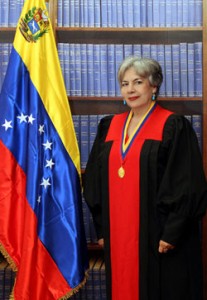